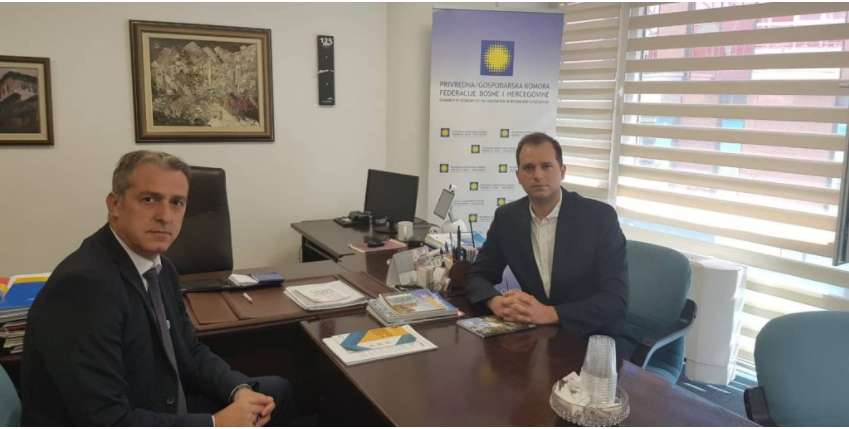 The American Chamber of Commerce in BiH, headed by the Secretary General Nedim Hamzić, held a meeting with the President of the Chamber of Economy of FBiH, Mr. Mirsad Jašarspahić.

In regard to the new Strategic Plan, the American Chamber of Commerce in BiH represents a meeting place, a place of exchange of knowledge and experiences and a place of influence on shaping the economic and social environment in BiH and beyond. The aim of the meeting was to deepen the cooperation between AmCham BiH and the Chamber of Economy of FBiH, in order to be united, in positive and efficient lobbying activities, thus influencing reforms faster and easier.

One of the topics of the meeting was, among other things, the agreement on the possible harmonization of annual and long-term overlapping work programs of the two Chambers, in the implementation of joint projects of interest to members.In the following period, AmCham BiH will hold meetings with representatives of the Chamber of Commerce of the Republic of Srpska and the Chamber of Commerce of the Brčko District.

In the field of joint projects of interest to members, especially when it comes to the work and activities of the Committees of the American Chamber of Commerce in BiH, a meeting with the Executive Director of the Foreign Investors Council Ms. Sanja Miovčić, resulted in an agreement in which the activities of the committees of AmCham BiH and the working groups of the FIC will be jointly realized in the near future. Successful cooperation in the past between FIC and AmCham BiH is the starting point for certain round tables of the Committees within the new AmCham BiH Strategic Plan of to be made with a common connotation. Given that the round rables will serve as an in-depth dialogue on the work of expert committees, it will be a reference point for creating Position Documents that will resonate better with relevant decision makers when it comes to the needs of AmCham BiH and FIC members and the to eliminate possible difficulties in doing business and / or improving business in BiH.